RICORRROBE is a brand by a Japanese designer living in the UK with a design team of several people. The work is not commissioned outside and all processes such as cutting, sewing and dyeing are done in London's atelier and made by hand.
The hand-dyeing and printing processes are also carried out in a studio garden converted into a laboratory.
Female designer Rico worked as a pattern cutter for a London brand for 13 years and founded RICORRROBE five years ago.
In parallel with his own brand, he continues to develop patterns and new collections.
The designer for men, Tsukasa, joined RICORRROBE three years ago and has been working together as a team to create their works.
Since the 2020 aw season, the first collection for men in Paris was released. 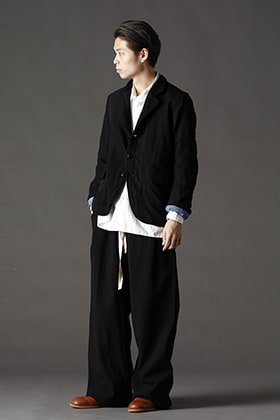 Today we would like to introduce you to the latest item from the RICORRROBE 20 -21 AW collection, which is a brand by a Japanese designer living in the UK, and is being sold in our Nagoya store.