The store will not work correctly in the case when cookies are disabled.
Sign up as a member to
get invited to our secret sale
DEVOA 23SS collection
Shop Now!
Yohji Yamamoto 23SS collection
Start of overseas delivery
SAINT MICHAEL ©SAINT M××××××
Now on sale!
Maison Margiela collection
New Arrivals!!
JULIUS 22-23AW collection
Shop Now!
maison MIHARAYASUHIRO Sneakers collection
Shop Now!
Payment Methods
Choose to pay via Credit Card or PayPal
Accumulate Points
Sign up and get 500 points!
International Orders shipped via EMS/DHL
Fast tracking service to any country!
suzusan Designer interview
Background of the brand launch and the way of thinking for the creation
5.19.2020

A designer interview project which focuses on the thoughts of creators to approach the background of creation.

This series features Suzusan, which has modernized Arimatsu Narumi Shibori, a traditional shibori tie-dyeing technique that has been inherited in the Arimatsu Narumi area of Nagoya City, Aichi Prefecture, for more than 400 years.

Hiroyuki Murase, born as the 5th generation of the family of Suzusan Shoten which inherits Arimatsu Narumi Shibori, started a new business in Germany and has arranged the traditional products from a unique point of view.

In this first episode, he told us about the background of the brand launch, what he experienced, and the source of creation he has polished up through the lessons he learned from those experiences. 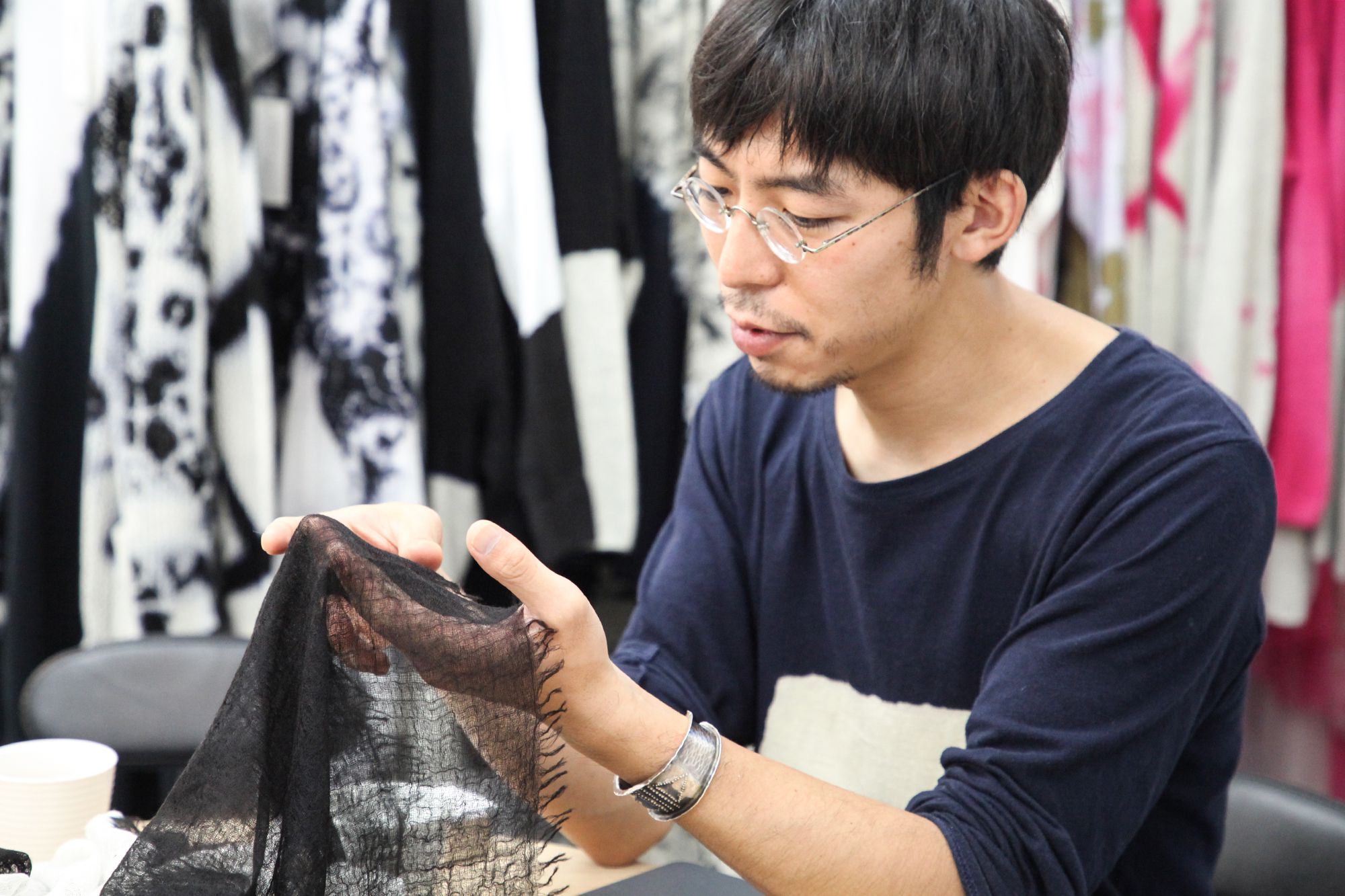 Based in Düsseldorf, Germany, Hiroyuki Murase, who was born as the fifth generation of the family of Suzusan Shoten, reinterprets and arranges the traditional Arimatsu Narumi Shibori technique which has been inherited in the Arimatsu Narumi area of Nagoya City, Aichi Prefecture, for more than 400 years.

He introduces collections that combine the tradition of Arimatsu Narumi Shibori with modernistic components.

He is the editor-in-chief, working mainly on the behind the scenes work.

He worked as a stage and advertisement photographer before joining the company in March 2019.

“I keep in mind to make an ‘open and comfortable design’ that blends in various countries and cultures,” 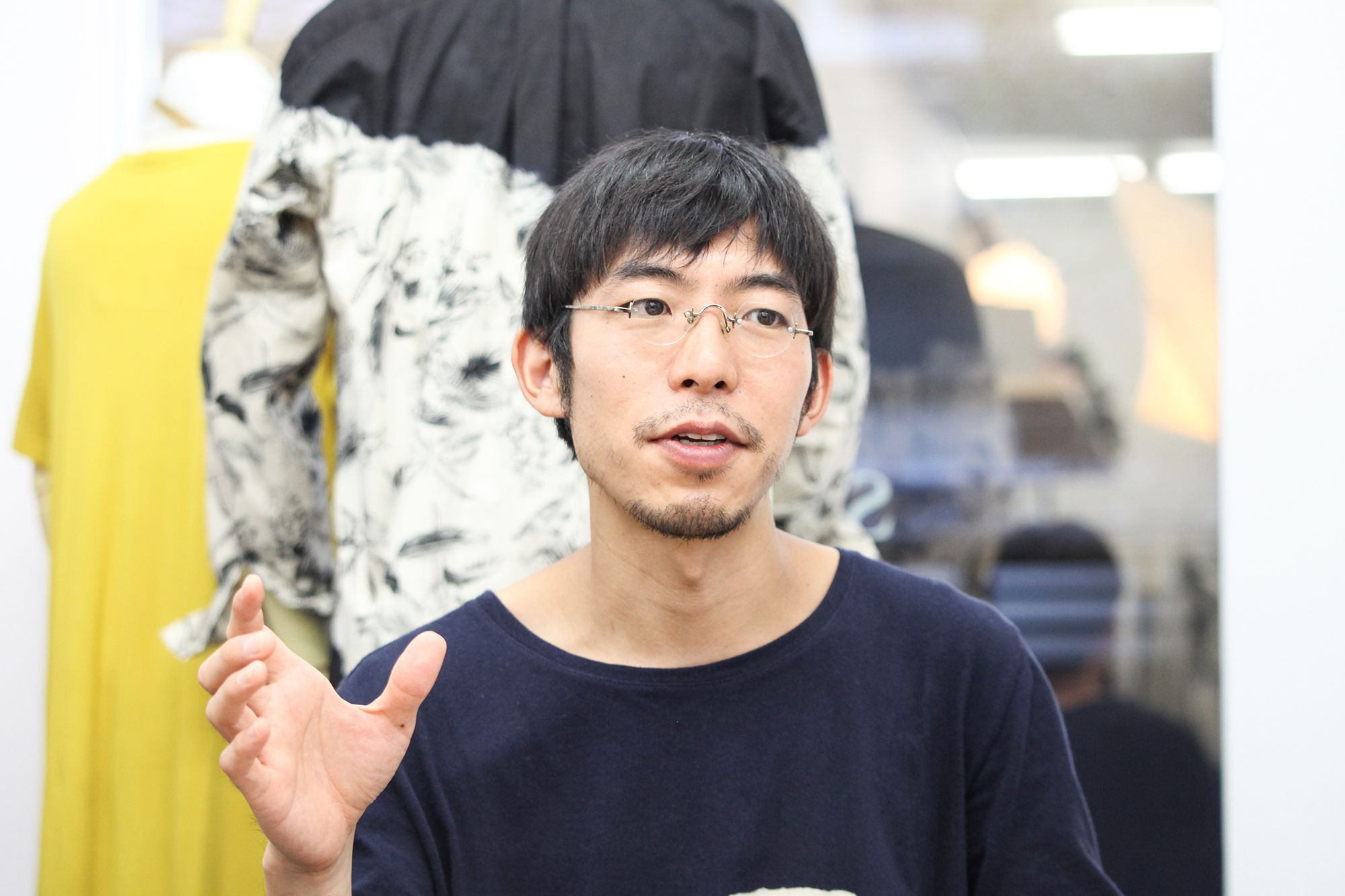 Mr. Murase, who, as the creative director of Suzusan, oversees the works from the selection of fabric to the designing.

Gone abroad aspiring to purse the world of art. Then, found a new value.

--- First, tell us about the story before you launched your brand.

I originally resided in Japan until the age of 20, but when I was in Japan, I had no intention to do such thing at all.

Because I was interested in art and wanted to pursue a career in that field in the future, I was thinking about going to an art university in Japan, but I failed the entrance exam.

So, on the way back home on the bus, I decided to go abroad.

Soon I got a part-time job and saved up some money for about a year. At first, I went to a university in the United Kingdom, but the tuition was so expensive that I ran out of money quickly.

When I was worried about what to do, I heard that tuition was free in Germany, so I transferred to a university there. 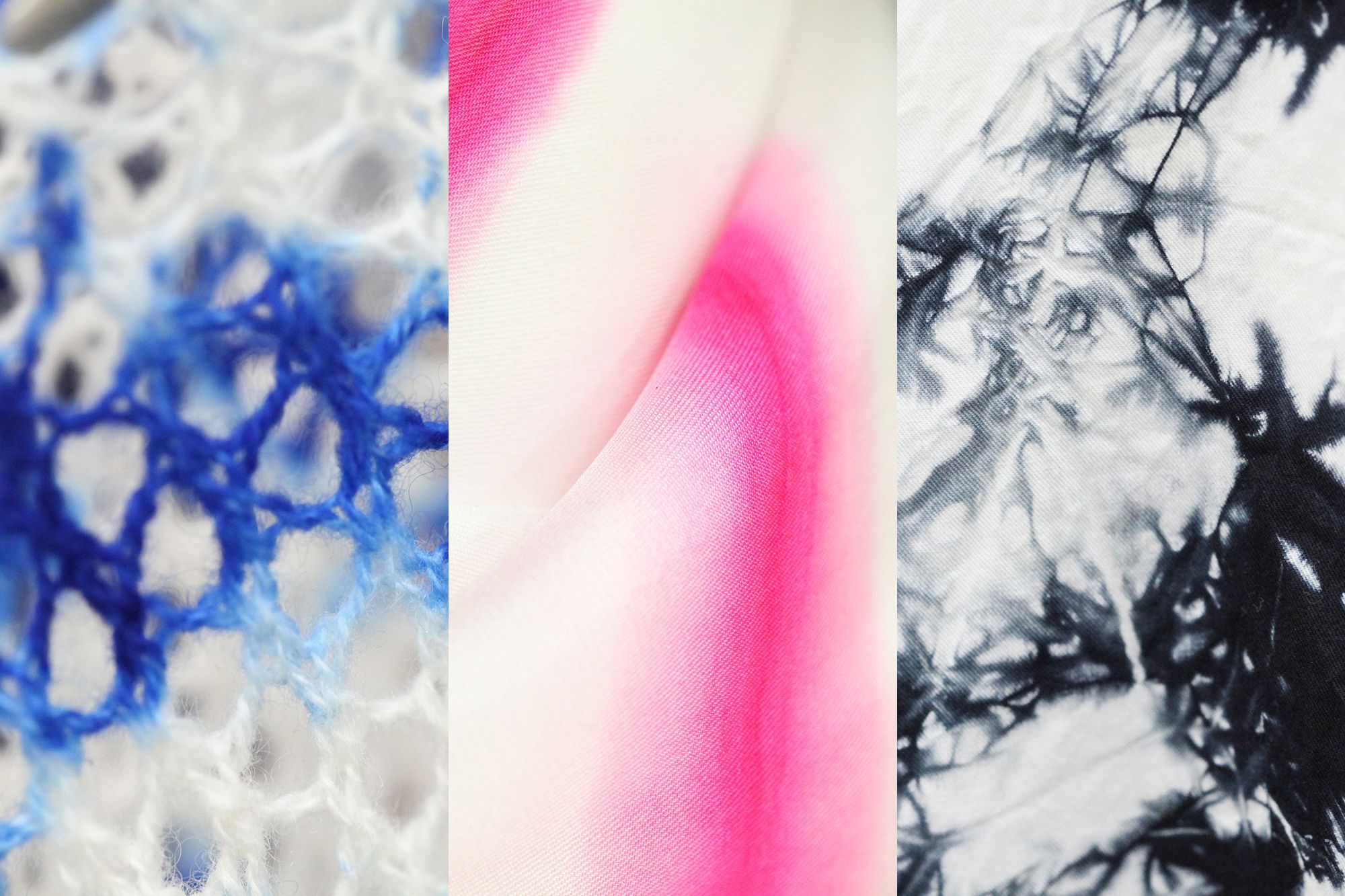 --- You said you did not intend to do this at first, but what inspired you to establish Suzusan?

My father did not say he wanted me to inherit the family business, but I heard the industry would disappear in 10 years and was thinking “it’s a waste to let it just disappear.”

The event that directly inspired me to start the business happened when I was a student. My father showcased in a textile exhibition in the United Kingdom and I went there to help him.

Then, I brought some of the pieces back to Germany, and a German friend of mine (Christian Dietsch), who lived in a flatshare*1 with me, showed a great interest in them.

When I saw his reactions, I noticed that the shibori technique I was so used to until then would give such a great impression on someone who was not familiar with the technique. I thought, what my family did might be very interesting.

Also, one more thing that made me look back on shibori was a display I saw when I went to Venice Biennale in Italy.

There I saw a showcase of anything jumbled together; from all times and places, regardless of era, genre, or popularity. I was so shocked that it would overturn the stereotype inside me that “art is made by an artist.”

They made me think that what you feel beautiful and such values may arise anywhere.

Dietsch’s reaction was huge, but so was this event.

For me, it was just the time when I was interested in business. For him, as he majored in Business and was thinking one day, he would like to start his own business, he probably thought “this is it!”

So, I explained about the pieces, and he said he wanted to start a company to sell them, and I casually responded to it and launched a company.

Dietsch and I still work together and I truly trust him.

*1 Flatshare: The way of stay where a few people rent a flat in a multi-story building and live together. 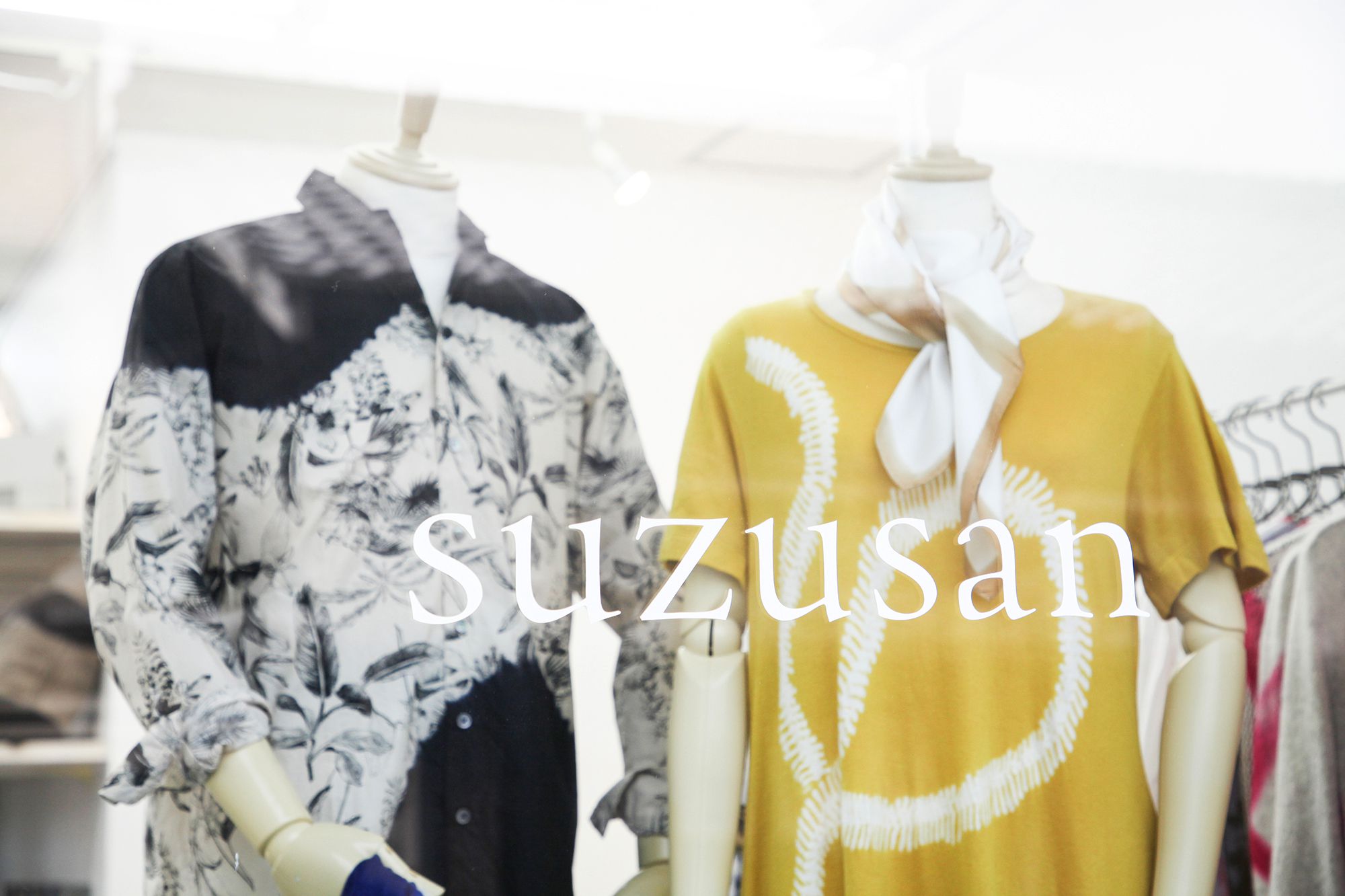 Display of a directly-managed store in Arimatsu.

Setback, conflict, and failure. Progressing little by little, he starts to gain prestigious recognition in the world.

--- Tell us about the time when you just launched your brand.

At first, we started with a really small collection; we made a few stoles with a Suzusan tag on them.

Even if we tried to contact shops to show our works, nobody would make an appointment with a brand nobody had ever heard of. So, we packed some pieces in a suitcase and visited various shops to sell them.

--- You visited them without an appointment?

Yes. Two of us went to specialty stores all over Europe, and gradually we got to be welcomed.

Among the visits, we got a huge opportunity when we visited L'ECLAIREUR; the buyer happened to be there at the store, and as we showed him our works, he gave us an order.

We did not even have an order form, so we asked him to write it down in the corner of a piece of A4 paper we had.

That was in the fifth year, and then, we started to get it on the track step by step.

--- Until then, did you go through many hardships?

Initially, we sold stoles that were worth tens of thousands of yen, but could not pay our 25,000-yen rent, so that was really hard for us.

Other than the sales, we experienced some backlash from craftsmen in Arimatsu.

During such hardships, my father bore the brunt of it and convinced them to gain their understanding gradually, which let us continue until now.

I am really grateful for that.

Fortunately, this is our 11th year since we launched the brand, and I never imagined that so many people would see our works. Dietsch and I often say “we would’ve never started it if it would be this hard in the future.” 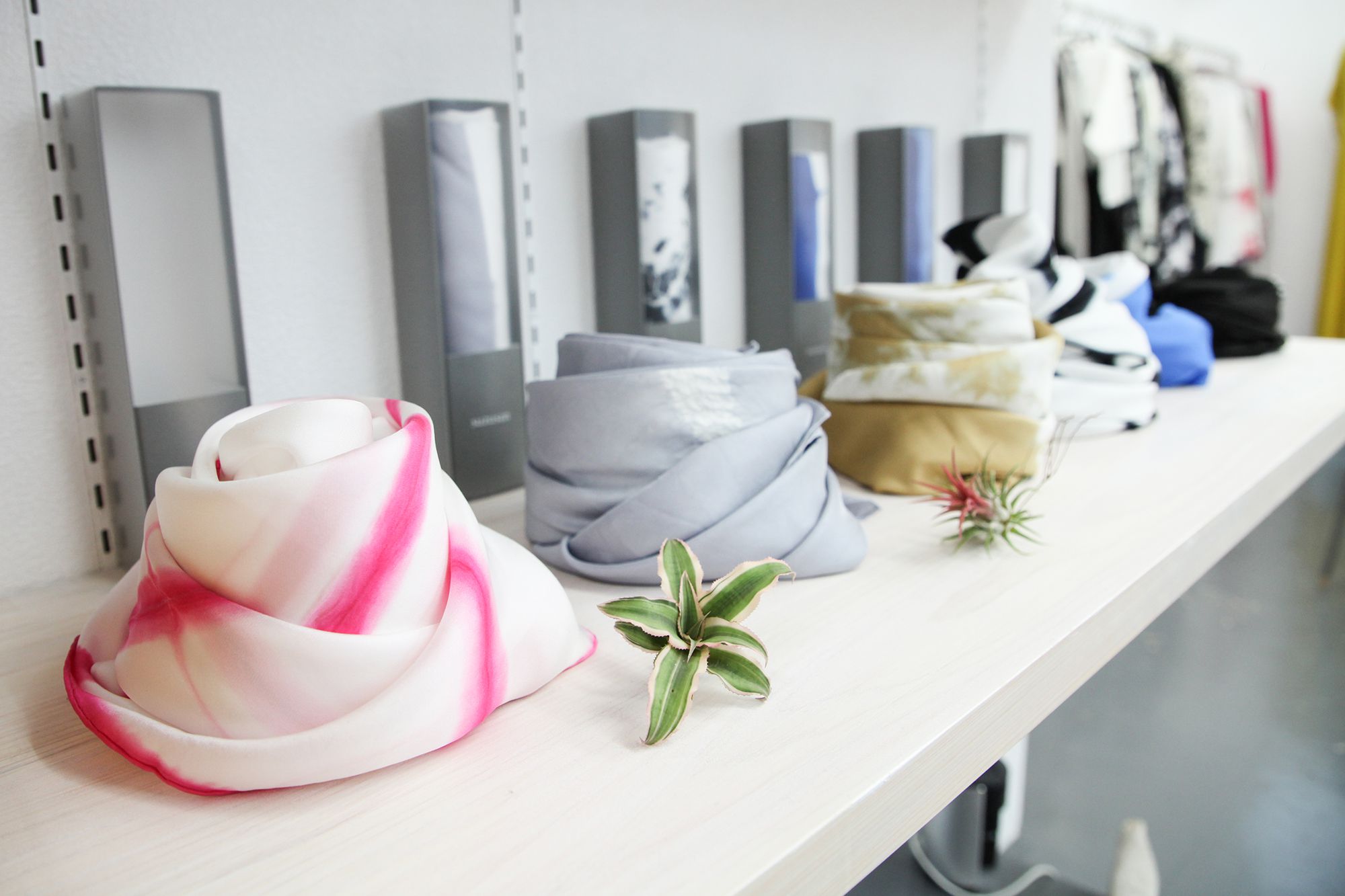 Design that blends in anywhere in the world.

--- What do you have in mind when designing and working on your pieces?

Now, Suzusan is sold in 23 countries. I imagine what the background would be like for a piece in various cultures and countries and keep in mind to always make it an open and comfortable design.

There are landscapes of various countries, and each landscape has a different life, climate, and religion. I think good work is something that blends in naturally in any place.

Every season, I work on my pieces imagining the people who would pick them up; the people who live there, what color they like, and what kind of life they pursue.

---You do not stick to showing shibori but rather for the sake of the people who would wear the clothes?

As long as we make clothes, I think we have to think first about the people who would wear them.

When I became a designer, at first, I felt really uncomfortable about this way of thinking. I thought it’s okay as long as I really liked it, but it did not have them accepted.

Then, I thought a good designer would be someone who could make something that would fit the users. 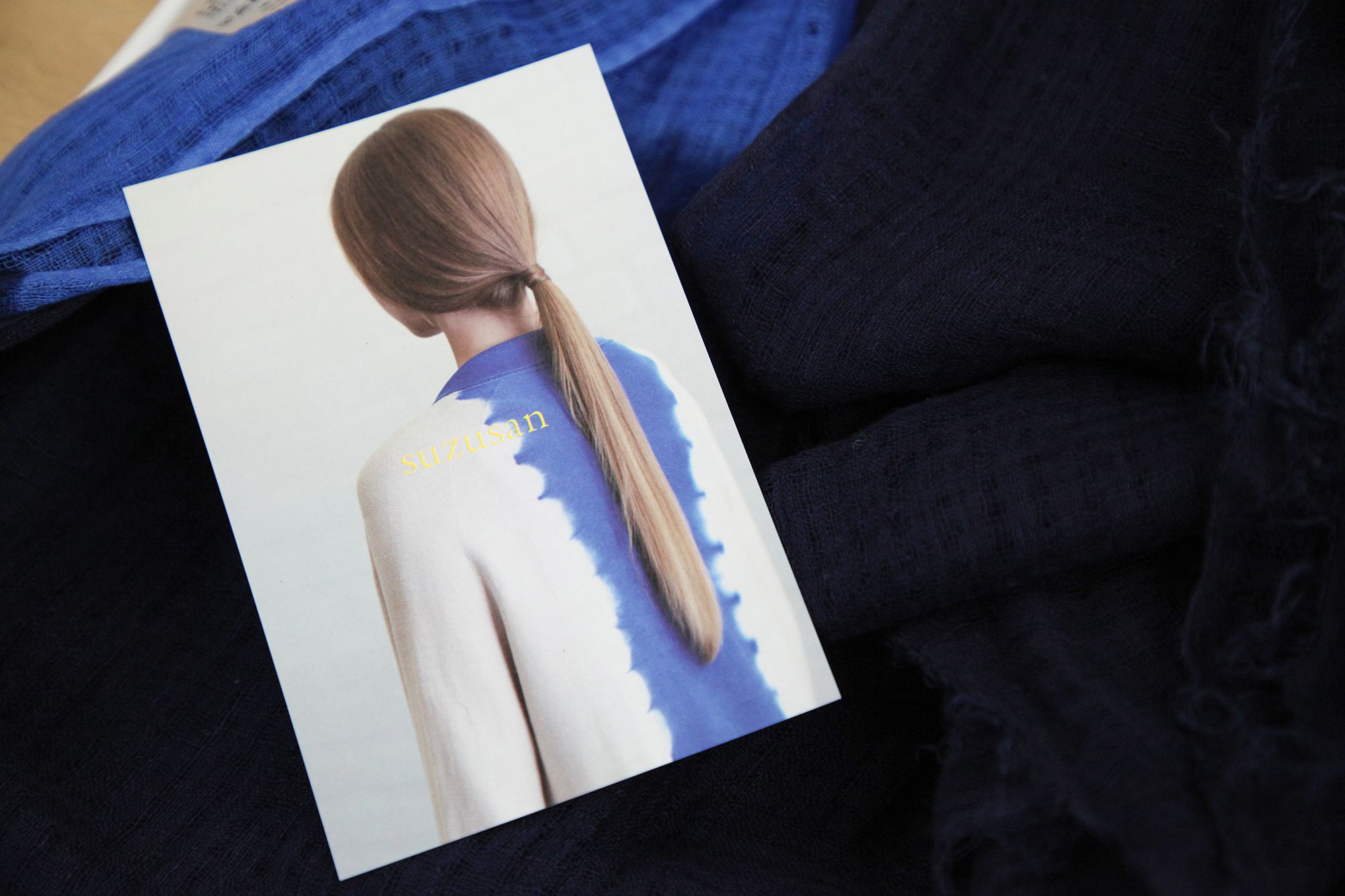 The beach-themed 2020SS collection. The one beneath the look book is a typical cashmere stole.

The source of inspiration is from his origin.

-- When working on your pieces, in what moments do you get inspirations?

I naturally like art and music, so I often go to art museums and galleries. I always try to leave in my head something I felt from art and music or something that clicked inside me.

Also, I like drawing, and I sometimes get inspiration from what I draw or drew in the past.

I save drawings I felt interesting, and in a casual moment, I often pull them out and put them together into a design.

Those are what I get my inspiration from.

The source of inspiration is art and music he used to aspire to.
He sometimes gets a hint from drawings he saves.

--- You make interior goods along with the clothes. What do you think are the differences between them?

For fashion, we have to make new pieces every half year, but for interior goods, we are asked to make something that can be used for a long time. The fundamental idea is different.

As the cycle is shorter for fashion, we can use interesting materials proactively. On the other hand, interior goods have a longer lifecycle, so we select materials that can be accepted 30 years later if I say it extremely.

When we continue to use materials, we gain experience on how to handle the materials. The amount of experience is gradually increasing in interior goods.

--- I suppose we do not change interior decoration every half year.

You see, well-designed interior goods do not go out of fashion for decades, really.

In fashion, however, we can’t always say something fashionable from 50 years ago can still be worn now.

It’s not always true that what we think is good now can be worn 50 years later.

--- Because there is no trend, you have some other difficulties.

There is a huge difference in terms of the way we think about production.

Although it takes time to bring it to universal status, there is no trend. And that’s what I found interesting about interior goods.

I realized that so much as I make them by myself. 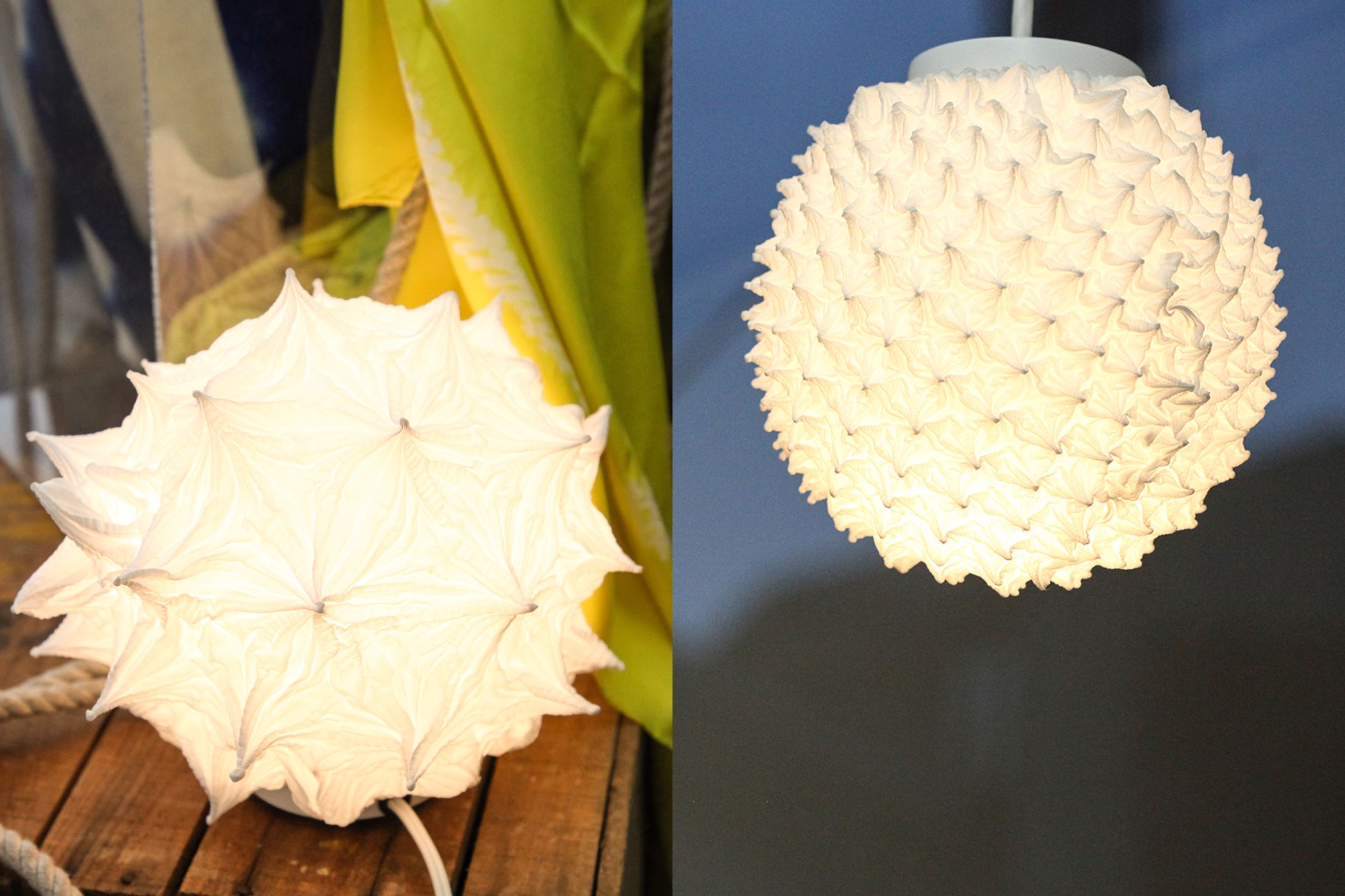 A lamp covered by a shibori-finished shade using polyester.

He puts elasticity, a unique feature of shibori, and artistic sense into the design.

In this episode, we asked how he overcame numerous difficulties to develop his brand, and how he thinks about design and creation.

In the next episode, we will ask him about the actual creation process and technique.